When I came to Louise Oppenheimer’s tapestry studio in Drimvore near Kilmartin, I had a feeling of coming home, though I had never been there. It was the same feeling I used to have, when I took a train to my parents’ home as a student. I knew I was welcomed there ‘no matter what’ – with good or bad news, with a bag full of dirty laundry that my mom would willingly do for me. I was welcome any time of the week, any time of the year…  Yes, Louise’s welcome was similar. 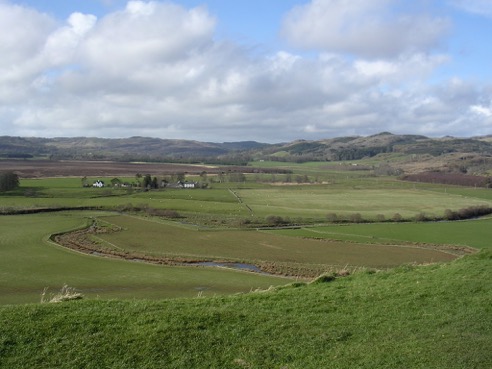 It was much later – weeks later – that Louise said, “My biggest skill, other than weaving, is putting people at ease when they come to my studio. They come to an unfamiliar space, not knowing exactly what to expect. I want them to be comfortable and stay here as long as they want and see what it takes and what a high-maintenance task it is to make a tapestry”.  A person must be at peace to be that welcoming to strangers. Not many of us are.

Louise’s early life was not very peaceful. Her family moved from one place to another a lot and it seemed like the last thing her parents thought about was what time of the school-year the move occurred, where and what school she would attend after relocation and what kind of social change moving from a boarding school to an inner-city London school, and vice versa, might bring. It was far from easy. She often found herself to be a misfit, and very well recalls being sent to Coventry because she arrived at a state school in a private-school uniform. Unlike me, who went home with all my dirty laundry, metaphorically and literally, Louise wanted to make her own life and moved out of her parents’ house at the first opportunity, to work as a child-minder. It was then that the thought of  what she was going to ‘do’ in her life occurred. 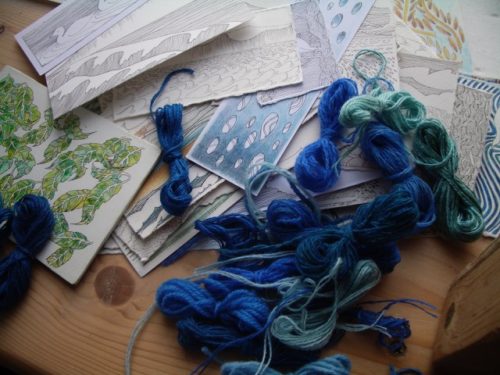 “I just put my portfolio together and applied to art school. I was accepted into the foundation course at Maidstone College Of Art and subsequently, into the Fine Art Department, ” Louise commented in a very matter of fact way about her choice to become an artist. I did not detect in her words that her decision was driven by a need for recognition, a wish someday to become ‘a well-known artist’, or a desire for a bohemian life-style. She was looking for peace – internal and external peace.  And when life’s turns and twists took Louise in 1985 to Kilmartin Glen in Argyll, she found that peace. The rich and varied landscape of the area, with Dunadd, the seat of Scotland’s earliest kings, many standing stones, rock carvings and imposing burial tombs, a short distance away have never ceased to inspire her. Time has a different dimension here.

‘The simple idea of pulling weft through warp demands patience, but in a world where speed is important I encourage the notion that weaving provides a simple gauge of time in the hours, days and weeks spent transforming strands of wool into a consolidated design,’ says Louise.

Her ego did not play a big part when she chose to study art. It does not play big role now either. ‘It is doing that matters. Once it’s done, you have to get over it and improve’, – says Louise. She even joked that for the pleasure of weaving tapestries after finishing each piece she has to do her ‘penance’ – to tuck the loose ends of the yarn on the back-side – one by one.  Joan Baxter, another tapestry weaver from Brora, about an hours drive north of Inverness, commented that if you wish to be a tapestry artist, you have to find a small inexpensive place to live – perhaps in some rather remote location: tapestry weaving is not something what supports a very lucrative life-style. 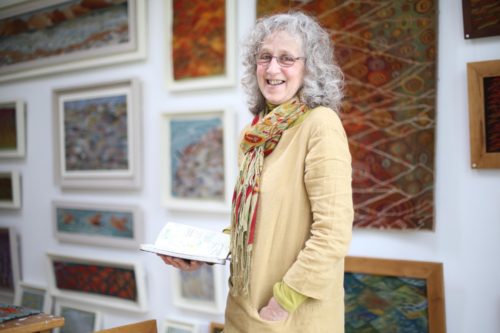 As I stood in her studio, built by her husband George as an extension to a small cottage, and where she works and displays her tapestries to visitors, I was looking at a vast, but rather stark landscape of the surrounding peat marshes. I did not think of it as an “iconic” Scottish landscape, yet, one element of it – white sheep – was unmistakably Scottish. ‘They glow in the evening light’ said Louise, and at that very moment, I felt her passion to the craft of weaving and internal peace was slowly taking me over, just like dusk was taking over the surrounding landscape with glowing sheep.

Perhaps weaving is somehow related to glowing sheep… Perhaps Louise’s welcoming attitude is also related to her life-story.  She is giving to her visitors what she did not receive when she arrived at each new location, new school, new setting – a warm welcome that puts you at ease.

Louise weaves in wool and cotton on frames nailed top and bottom, around which the cotton warp is stretched. Her tapestries range from a minute motifs as little as 12 x 12cm to large 120cm x 100cm tapestries. She will be exhibiting her tapestry weavings in a joint exhibition with ceramic artist Maggie Zerafa.  The exhibition ‘Semitones’ will run from March 10th till April 8th at the Birch Tree Gallery. 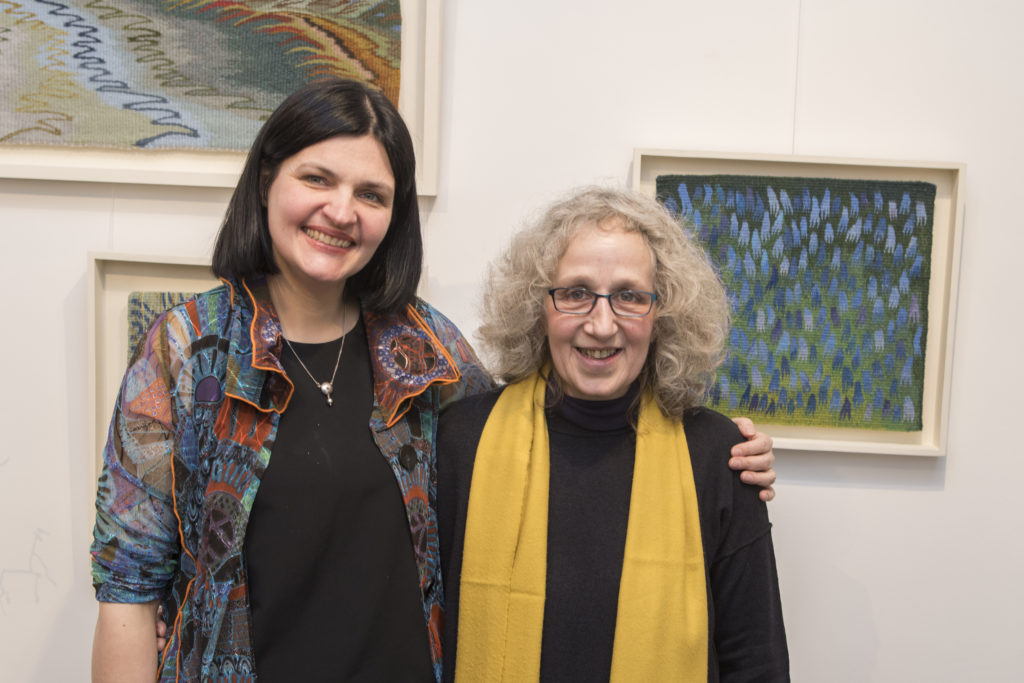